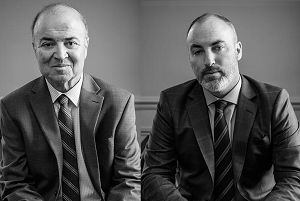 Attorneys Jim and Michael Goldstein have nearly 70 combined years of experience and have collectively been involved in more than 300 jury trials and 80 murder trials. They work closely together to prepare for trial and often work as co-counsel. Between them, they are admitted to the California Bar, the U.S. District Court-Central and Western Districts of California, the U.S. Court of Military Appeals, and the U.S. Supreme Court.

The attorneys at Goldstein Law Group have vast knowledge of the local courts, judge, and prosecutors. Providing innovative and compassionate representation, they are committed to pursuing the best possible results for each client.

Year this Office was Established: 1975

At Goldstein Law Group, we provide legal representation in the following areas:

The use of marijuana for medicinal purposes is a subject of much controversy. Supporters stand by the drug’s ability to ease suffering for people with terminal illnesses and debilitating conditions, while the federal government considers possessing, cultivating, or distributing marijuana a crime, regardless of whether it’s for medicinal purposes or not. The conflicting laws between the state and federal government make medical marijuana charges very confusing and have made it difficult when it comes to prosecuting individuals for medical marijuana crimes. As a result, many people with lawful prescriptions for medical marijuana are finding themselves arrested or in trouble with the law. Furthermore, Los Angeles Mayor Antonio Villaraigosa has urged the city council to place limits on the number of medical marijuana dispensaries.

If you have been convicted of a crime, you may be eligible to file an appeal. Appeals are usually sought when a defendant feels a mistake or error was made during the original trial. Errors or mistakes can be committed unintentionally during a trial in many different ways. Some examples of errors or mistakes that justify an appeal include:

An expungement is a process of removing or dismissing a conviction from a person’s criminal record. Pleas of guilty or no contest can also be expunged from a criminal record. When an expungement is successful, it will be as if the defendant had pleaded “not guilty” and the court ordered the case to be dismissed. It should be noted that an expungement doesn’t erase a criminal conviction. Rather, all of the records revolving around the defendant’s arrest and conviction will be sealed in a file, and the court will place a notation stating that the conviction has been dismissed. It should also be noted that not all convictions can be expunged. Under California law, felony convictions in which the defendant was sentenced to federal prison are not eligible for expungement. Furthermore, a defendant, regardless of the type of conviction, must have successfully completed and abided by all of the terms of their probation.